Fukuoka, Japan, 9 December 2019 - Nayuta Inc., the 4th implementer of the Lightning Network BOLT protocol and the applications developer, today announced it has introduced the first lightning wallet to implement "Bitcoin full node and SPV mode" hybrid on Android and released its code on Github. By open-sourcing, users or developers will be able to confirm how this wallet actually works and/or modify it by themselves1. 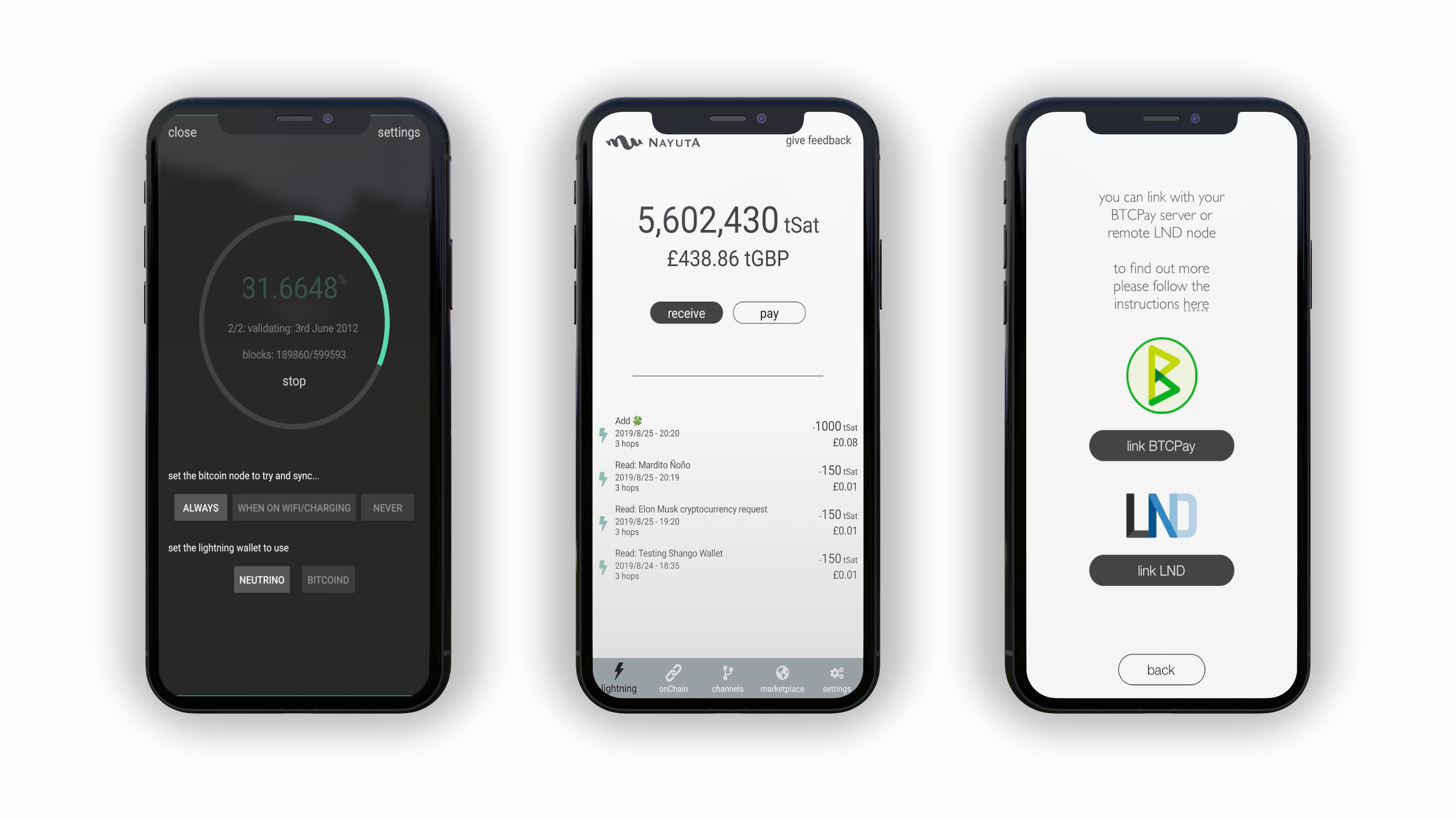 Emergence of a full node on mobile

Generally speaking, running a full node gives users improved privacy, security, and self-sovereignty. A full node usually runs on a PC due to the necessity of the high-performance CPU, broadband Internet connection with high speed, and large storage. However, recently some ideas on running it on smartphone have came out. ABCore by GreenAddress, for example, is an Android app that makes it easy to run Bitcoin Core. On top of that, HTC has also recently launched the smartphone Exodus 1s that can run a full node inside the hardware itself along with extra security features.

Nayuta Wallet to run a full node and SPV mode

In order to contribute to accelerating this trend and to the wider Bitcoin and Lightning community, we’ve implemented and open-sourced the Nayuta Wallet, the first lightning wallet to introduce a "full node and SPV mode" hybrid on Android ala ABCore2. By simply installing the Nayuta Wallet app on any Android device, users can start smoothly playing with a Bitcoin full node and Lightning Network. With this, users can enjoy benefits such as the following;

Choice of running a full node on mobile instead of PC
Nayuta Wallet is available for many regular Android phones today. In our full node configuration, full node will validate all blocks (fully validating node) of course, however the transaction history will be pruned to conserve the storage (pruned node). As it keeps only a fraction of the transaction history, users don’t need extra hardware such as SD cards.

Choice between the control of a full node and the convenience of SPV
Nayuta Wallet enables users to switch between full node and SPV mode for the desired balance of control and convenience. Regular users may use it as a simple SPV lightning wallet for convenience and ease of use in most occasions. However, if they desire more control and sovereignty, they can simply switch the lightning wallet to use the full node. Furthermore, there is an additional hybrid mode giving users even more configuration, for example, the wallet can run in SPV mode for ease and convenience when the user is out and about whilst the full node runs periodically in the background validating blocks. This validation can be further configured to run only when the user is connected to Wi-Fi and their device is charging in order to conserve battery life and mobile data.

Also, Nayuta Wallet is the first Lightning Network mobile wallet with an integrated Bitcoin full node3. Regular users can use it as a usual lightning wallet whilst developers or power users can run the full node. We believe Lightning payment will be a vital feature for future Bitcoin wallets. We hope the combination of Bitcoin full node and Lightning Network on mobile will help realize the possibilities of both of them.

If you have any further questions, also check out the article below by Christian Moss or contact him at chris@nayuta.co Running a LND along side bitcoind on android (Technical Article)

*1: The source code of Nayuta Wallet is licensed under the Apache License, Version 2.0. The code can be freely modified and redistributed except Nayuta Inc. (trade name), Nayuta Wallet (product name of the licensor), or trademarks and service marks including a logo.

*2: Nayuta Wallet is available for Android and iOS although the full node feature is only for Android and still in beta. Additionally, it works on other Android OS devices such as Android TV.

*3: Nayuta Wallet is powered by LND. The app is still in open beta so we urge users to only use small amounts that they would be willing to lose as loss of funds is still possible.

About Nayuta Inc.
Since established in March 2015, Nayuta has worked to develop technologies primarily on the layer 2 technology. The company has engaged in the global community as an active contributor to Lightning Network, as well as contributed to the development of an application utilizing the layer 2 technology in collaboration with business companies. The latest releases include a Lightning Network implementation called Ptarmigan, Lightning Shield for Arduino that developers can experience electrical engineering with Lightning with ease, and Nayuta Wallet.